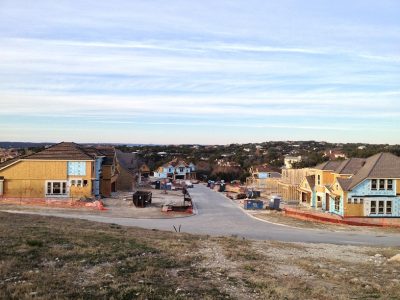 New homes under construction in The Overlooks

The Texas economy continued to expand in November 2018, but did lose some steam, according to a Real Estate Center at Texas A&M University report. Factors weighing down the expansion included lower oil prices, lower home sales, and weaker hiring in the service sector. Factors elevating the expansion included upward wages due to low unemployment and historic levels of crude production. Manufacturing also created a record high number of jobs.

Austin and Houston business-cycle indices “boomed,” according to the report, with 7.4 and 6.4 percent growth, respectively, while Dallas slowed to four percent and Fort Worth slowed to 2.7 percent growth. The overall Dallas Fed’s Texas Business-Cycle Index was up five percent, for the first time since January 2015.

Texas housing sales decreased 1.1 percent in November 2018. According to the report, they “remained on a flat trajectory.” Purchase applications for mortgages experienced 5.7 percent growth, while refinance applications decreased 38.5 percent since January 2018 due to higher interest rates.  The Federal Home Loan Mortgage Corporation’s 30-year-fixed rate increased for the fourth consecutive month, to 4.87 percent.

Texas added the fewest nonfarm jobs in a year, due to a slowdown in the service-providing sector. The labor participation rate stayed steady for the third month in a row at 63.7 percent, and unemployment stayed firm at a record low of 3.7 percent. Austin had a 2.8 percent unemployment rate, and earnings increased by 0.7 percent.