Over the Moon for Austin’s Moontowers

Austin real estate newbies (or even those who’ve been here a while) may be wondering: What’s all this buzz about moontowers? And, what are they anyway?

Moontowers, or more accurately, moonlight towers, are 165-foot-tall structures that were designed to illuminate a circle of 3,000 feet with “artificial moonlight.” This was in the late 1800s, before the use of electric street lights, when most of Austin’s 15,000 or so residents relied on candlelight. Whether these towers were a response to Austin’s not-so-distant distinction for the United States’ first serial killer – the Servant Girl Annihilator – or were just signs of a burgeoning community embracing new and exciting technologies is unclear.

Throughout the U.S., moonlight towers were common in the late 1800s in their original form as carbon-arc lamps. In the 1920s, they were changed to incandescent lamps and in the 1930s, to mercury vapor lamps – and that is where most moonlight tower stories start to fade.

But not in Austin! Austin is the only city in the world known to still operate a moonlight tower system. Today, they serve as Austin icons, with 17 of the original 31 towers still in use. According to City of Austin plaques placed at the towers, “Austin’s tower lights are the sole survivors of this once-popular, ingenious lighting system.” 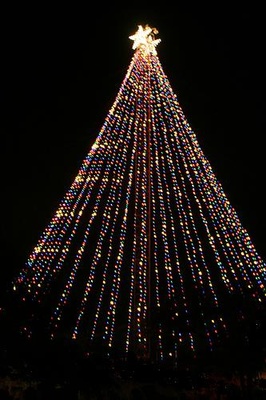 nergy celebrated its centennial by refurbishing the 17 remaining towers, preserving them for posterity. (Several have been temporarily dismantled to protect them during construction projects but are expected to be put back up once construction is over.) All the towers that still stand are zoned historic by the city of Austin, designated Historic Landmarks by the State of Texas, and listed in the National Register of Historic Places.

Most of the structures make their home in central Austin, with the most noticeable probably the structure in Zilker Park – where hundreds of thousands of Austinites have spun underneath its incarnation as the Zilker Holiday Tree!

What else is Moontower-themed in Austin?

Moontower Comedy and Oddity Festival – Held for the first time in 2012, the Moontower Comedy Festival is destined to become an annual Austin tradition. Bringing in talent from around the world, the Paramount Theatre-hosted festival offers days of laughter from dozens of comedians.

“Party at the Moontower!” – This famous quote was mouthed by one of Austin’s own, Matthew McConaughey, in the movie, Dazed and Confused. 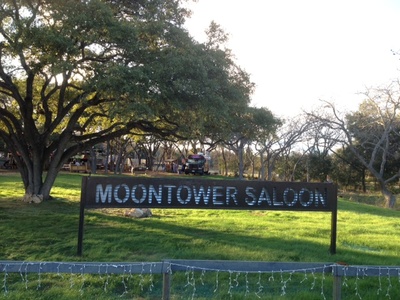 Moontower Saloon – Looking for a locally owned drink/dine live music destination in 78748? Relax and enjoy yourself South Austin style at the Moontower Saloon. “It’s retro chic meets urban industrial backyard garden,” says co-owner Josh Bumb. He and Richard Veregge set out over a year ago to combine the best aspects of a friendly neighborhood bar with a prime location (only a few miles east of homes in Circle C) for some of Austin’s best trailer dining options. The results speak for themselves: a full bar with beer on tap, delicious grub for the foodies, three acres of mature oaks, washer pits, pool, and live music under the stars.

Regent Property Group celebrates Austin’s rich history and culture. On the lookout for your own piece of Austin history, perhaps a downtown condo or a luxury Austin home for sale? Check out Austin Home Search!