Creativity and the city of Austin go together hand in hand, and that’s because Austinites are a band of innovative artists, philanthropists, athletes, businessman, chefs, filmmakers, and writers. Scott Sutton, a local children’s illustrator and author, is one of Austin’s creative trail blazers. Starting his career as a commercial artist in 1971, Sutton moved to exhibiting paintings that featured characters from his now-popular children’s books, The Family of Ree. “I’ve drawn since I was a little kid,” Sutton said, “I went to work right out of high school as an artist, part time, and then full time into commercial art. By 1978 I was a gallery artist…I wrote my first book The Family of Ree in 1969, some parts in creative writing class in high school.” 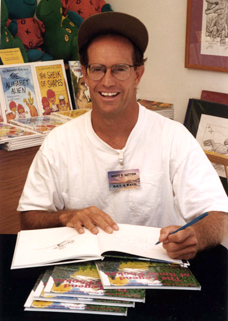 The first Family of Ree book was published in 1985 and has since seen five printings and the development of a much-loved series of stories. The whimsical books are written in rhyming verse and geared towards younger children under ten, but adults also have fallen in love with his enchanting illustrations and the adventures of Erf, a wizard-in-training, who learns valuable life lessons on each excursion. “Each book has a moral as the basis of the story,” Sutton explained, “like honesty, treating others as you want to be treated, taking care of the environment, and things like that.”

The popularity of the Family of Ree series led to other books that included The Keukumber Kids, books that teach children critical skills like counting, the alphabet, and manners, and How to Draw Stuff, an art book that teaches techniques utilized by Disney and comic book artists. Another series, Dinosaur Dog, was written and illustrated following the popularity of Sutton’s previous books. Dinosaur Dog follows the adventures of a pup who finds a time tunnel leading back to the age of dinosaurs. The dog, Dino, is accompanied by his friends Benjamin and Lee on adventures in a time when people do not top the food chain.

When not writing, Sutton is busy touring the U.S., visiting elementary schools to inspire both children and their teachers in workshops titled, “Education Through Imagination.” Having begun drawing when he was just two years old, Sutton knows a bit about cultivating the creative spirit at a young age. At each workshop, Sutton has the children help him design and draw a new character, and he gets their input on his stories. “It’s good for a children’s book author to get feedback from the people who read your book – the kids…I get inspired by helping kids out wherever I can,” he added.

Sutton and his wife have now been in Austin for seven years, and he says they both love it. “Austin is a great, creative place,” he says, “We like being here because people read a lot, and it’s very important for people to read. It’s a great space, almost like a Renaissance town… I’m also very inspired by music so I’m in the right place. You can go to a show in downtown Austin, and you might not hear that music somewhere else for a year. It’s a great musical scene, and it’s very cool.”

Currently, Sutton is working on new, expanded editions of the Family of Ree books and adding a sequel to How to Draw Stuff, both of which should be available by late 2012. Sutton says, “I love creativity and love art; I love drawing and writing.” Earning his place in the children’s literature canon wasn’t an easy journey, though, despite his innate passion for the work. “Artists need to learn the business of art, too,” he explains, “It can be difficult, but it’s something that has to be learned. They say that artists aren’t good business people, but that’s like saying gardeners aren’t good airline pilots – they just aren’t trained on it. Business just needs to be learned….I left home when I was 17 and I couldn’t afford to go to college, so I had to learn this stuff on the job…Artists, writers, all forms of art, are the ones who create the view points of the culture, so most importantly, make art that does some good.” His popular books that teach children lessons and positive values are prime examples of this philosophy.

If Austin is the city where you’d like to nurture your own creativity or follow your passion, contact an Austin realtor to help you start your new Austin home search. Whether you’d like to be a steward of trees in Barton Creek West just like a Wizard of Ree or find space for your own Dinosaur Dog to roam at Davenport Ranch, a Regent property expert can pair you with the perfect home.