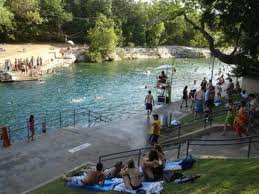 Temperatures in Austin frequently reach the triple digits and stay there for extended periods of time, making Barton Springs one of the most popular attractions in the city. Some Austinites love it so much they spend time there even during the winter, as the water temperature only fluctuates around 3 degrees lower than in the summer, from 71.6 degrees F to 68 degrees F. The three-acre, over 18-foot deep pool with its pecan tree lined, grassy banks is a popular area for people watchers, sun bathers (some of whom are topless—it’s legal everywhere in Austin), yogis, tourists, and others – including Robert Redford, who learned to swim at the pool while visiting family when he was just five years old.

The springs have a vibrant history: 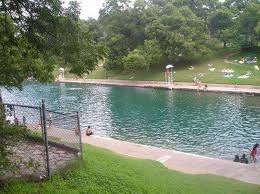 – temporary mission sites erected by Spanish explorers around 1730, before they moved on to San Antonio

– the area’s namesake, William “Uncle Billy” Barton, who named the three springs after his daughters, Parthenia, Eliza, and Zanobia.

The history also includes the last private owner of the property, Andrew Jackson Zilker, who donated the property in stages from 1917 to 1934 to the Public Free Schools of Austin. The donation required that the City of Austin buy the land at an inflated price, thus benefiting the schools and allowing them to create their school-to-work program. In 1929, the irregular-shaped pool was enlarged to 1,000 feet long, with a concrete lower dam and sidewalks, and an upper dam was added in 1932. 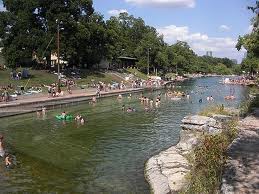 The pool is open from 5am to 10pm daily (though it is closed from 9am to 7pm on Thursdays for cleaning). Admission to the pool runs from $1-$3, with 10% of ticket sales going toward the conservation efforts for the Barton Springs Salamander, whose only habitat exists in and around the springs. Food, alcohol, and smoking are not allowed on pool grounds, which helps keep the area pristine.

This affordable getaway inside the city is a great place to spend a couple of hours or an entire day, basking under the Texas sun or becoming an urban polar bear. If you would like to live close to Barton Springs in Central Austin, perform an Austin Home Search and let Austin Realtor Brian Talley help you find the perfect spot.