Fighting for Reign of the Austin BBQ Throne 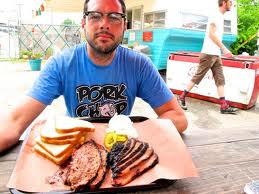 Texas BBQ is a phenomenon known throughout the world as a localized wonder of culinary instinct. The families who have spent years creating the Texas BBQ reputation are revered throughout the state as royalty. One such royal family, the Mueller’s of Taylor, Texas, have reigned in Central Texas for decades. When their son John Mueller opened up shop in Austin in 2001, not far from the Milwood neighborhood, Austinites thought they were finally getting one of Texas’ own native sons to bring them what they had been missing, perfectly smoked meat.

However, John Mueller struggled in Austin, and, after enjoying a short success, moved back to Taylor. One of his employees, then 29-year-old Aaron Franklin, bought Mueller’s pit, cleaned it up and opened up shop for himself. Franklin’s BBQ has become Austin’s most popular place for brisket and other BBQ. Franklin completely sells out every day before 11 a.m. 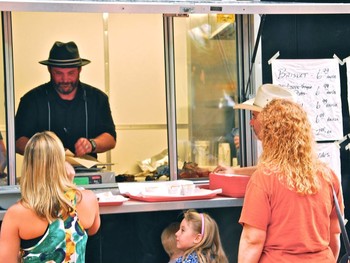 After months of whispers on Twitter and rumors floating around the web, Mueller parked a trailer and a barrel smoker on South 1st Street and gave Austin what it had so longed for: more smoked-to-perfection meat. There is little conflict between Franklin and Mueller, as both have lines of customers for blocks and sell out of their perfectly smoked meats before they even open. The two have seen each other since Mueller’s return and are friendly, yet the potential for a Best BBQ tug-of-war has Austin meat-lovers in an uproar. Some customers have chosen sides, some have remained loyal to Mueller, and even more have chosen not to discriminate and let the meat speak for itself.

If you are ready to make royal Austin BBQ a part of your daily regimen, search Austin homes and allow a Regent Property Group Austin REALTOR® to help you find the perfect place to call home.