Austin is home to many pleasurable creations, and one of its newest, most popular exports is both natural and man-made: liquor. As the variety of spirits distilled in the Austin area grows and flourishes, the creators of those spirits continue to draw inspiration from Austin for the culture of their products. Below, we’ve paired Austin iconic alcohols with their Austin landmarks. 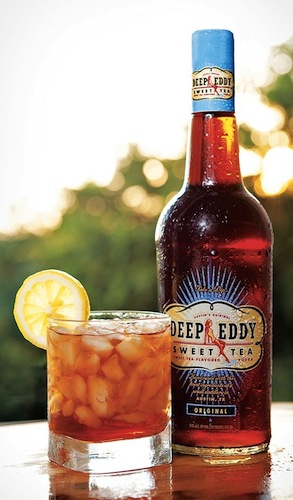 With offices off of Congress Avenue in South Austin, Deep Eddy Sweet Tea Vodka has made a sizable impact on the community since it was first introduced in 2010. Combining vodka with a traditional Texas mainstay seemed as natural as the cold springs that inspired the name and the natural Texas ingredients, like 100% cane sugar, clover honey, Texas spring water, and black tea, that flavor it.  The vodka was created by Sweet Leaf Tea founder Clayton Christopher, along with Savvy Vodka founder, Chad Auler, who came together to create the first flavored vodka ever produced in Texas. For those not so inclined to mix their tea with vodka, Deep Eddy Vodka was introduced in 2011 as an unflavored alternative to the sweet version.

Deep Eddy began as a swimming hole in the Colorado River and eventually transformed into a resort with a bathhouse in the 1920s. It is now a popular pool operated by the City of Austin, located just off of Lake Austin Boulevard. The water of the pool is as refreshing as the vodka it inspired, as water temperatures vary between 65 to 75 degrees, and it is not chlorinated. As the oldest swimming pool in Texas, it is listed as a historic landmark on the National Register of Historic Places. In addition to inspiring the vodka’s name, the waters of Deep Eddy have been the inspiration for various works of art and the song, “Deep Eddy Blues” by Jimmie Dale Gilmore.

The makers of Treaty Oak Rum put as much pride into creating their product as the people who care for the Treaty Oak do in maintaining the tree: “The unwavering Treaty Oak sets a high standard, the same standard we use to produce Treaty Oak Platinum Rum.” Their claim to fame is they are Texas’ first and only distillery that brews and distills their spirits, and they are one of the few micro-distilleries in the US that adheres to a labor-intensive production method. The distillers of Treaty Oak Rum, Graham Barnes Distilling, also have branched out and created Graham’s Texas Tea, a sweet tea flavored vodka.

The last surviving member of the Council Oaks, Treaty Oak stands proudly in Central Austin. The Council Oaks were 14 trees that served as a sacred meeting place for Comanche and Tonkawa Tribes, a historical fact that has since spawned many local legends, including the possibility that this Southern Live Oak was witness to a treaty between Native Americans and Anglo settlers (one of whom may have been Stephen F. Austin). Treaty Oak currently stands in Treaty Oak Park, on Baylor Street between 5th and 6th Streets, marked by a plaque. The 500-year-old oak sustained much hardship throughout the 20th century, as its former owner tried twice to cut it down (between 1927 and 1937) and vandals poured massive amounts of herbicide at the base of the tree, nearly poisoning it to death. The tree is now a symbol of both the resilience of nature and the care of the community that has helped keep it alive.

Originally created by the Kelleher brothers in 2007, Dripping Springs vodka is slow distilled in 50-gallon batches over 20 times in hand-made copper pot stills in, you guessed it, Dripping Springs. In addition to the purity that is produced by their process, the mineral rich artesian spring water they start with also makes it so pure that it is the only American vodka ever to win the prestigious Vodka Purity Trophy in London, in 2008.

Located just outside of Southwest Austin, the small town of Dripping Springs was founded in 1854 by three Mississippi families who wanted to start a new life in Texas. As the “Gateway to the Hill Country,” it’s no wonder they chose this location; the beautiful landscape of the town is near some of Texas’ best natural attractions, including Hamilton Pool, Westcave Preserve, and Lake Travis. Those attractions, among many others, also have drawn celebrities to the town, such as actor Kyle Chandler and musician Sam Beam (of Iron & Wine).

With so many wonderful drink creations tied to such rich history and landmarks, it’s clear as pure vodka that Austin is a wonderful place to live. For those who take pride in drinking locally, finding an Austin home for sale is a great way to do that, and the Austin Realtors at Regent Property Group can help find the right one.