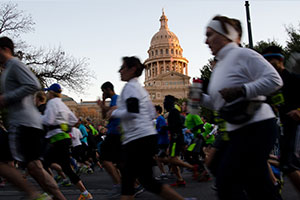 Zombie movies aren’t the only venue one can see thousands of people running in one direction. The Austin streets are home to numerous races that draw a wealth of locals and visitors to the city for health and sportsmanship. Many of the races benefit local charities, and each one allows foot traffic to take in the scenic beauty of the city’s skyline and surrounding hills.

The Statesman Capitol 10,000 foot race is the largest 10K in Texas and the fifth largest in the nation. Held annually for almost 40 years, the Cap 10k race attracts a wide range of runners, from the silly to the serious, and has become an annual celebration of spring’s arrival every year in Austin. First run in 1987, the race has never strayed far from its staggering first registration of 28,341 runners. As the name suggests, the event starts in downtown Austin, with the miles of runners in view of hill country homes like the Eanes ISD neighborhood as they snake their way throughout the city’s most popular streets and trails.

The Austin Marathon is an annual marathon, founded in 1991, held in Austin alongside a sweeping Health and Fitness Expo at the Palmer Events Center. The race traditionally starts on Congress Avenue, just a few steps from the Capitol building, and passes Austin landmarks like the Colorado River, the popular Hyde Park neighborhood, and the University of Texas. Showcasing its reputation as “The Music Capital of the World,” the marathon includes performances by live bands and also a beer stop towards the end of the race for marathoners who want to numb their pain or get a jump on celebrating finishing. The marathon also serves as an important annual fundraiser for Austin charities. Known as the Austin Gives Miles program, funds raised help provide local non-profits with the opportunity to advance their missions through community awareness and active fundraising.

The adage “Keep Austin Weird” has been encapsulated in this zany annual race. Run, skip, or race three-legged through the streets of downtown Austin in this run against normality. Race entrants have a reputation for wearing the wackiest costumes they can dream up (weirder is encouraged, to stay on theme). A variety of fun stops along the race route help runners catch their breath, or lose it, as stops are intended to induce serious belly laughs. The checkpoints typically include Austin favorites, like Amy’s Ice Creams, Austin’s Pizza, and shots of Deep Eddy Vodka. Unofficially known as “the slowest 5K you’ll ever run,” race entrants also benefit from free entry into the accompanying Keep Austin Weird Festival, which features live music and local Austin food, drink, and craft vendors.