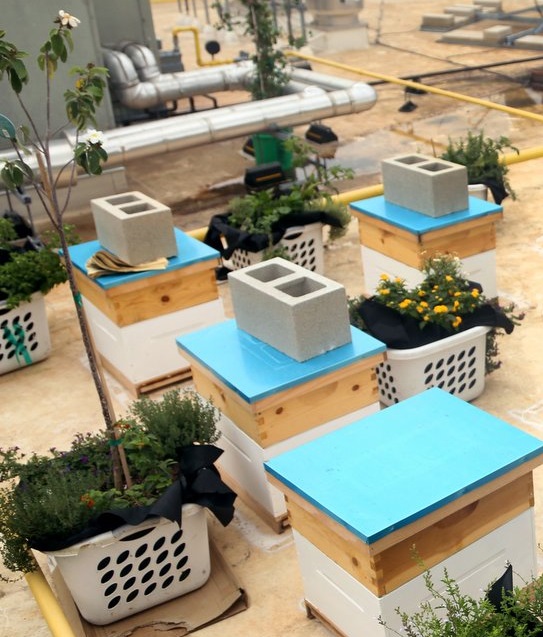 Twenty years ago, a salamander that made its home in the spring-fed pools of Barton Creek was making ATX headlines. Next, Austin’s bat colonies took front and center. Now, it’s a million endangered honeybees hived in an apiary 38 stories high atop Austin’s esteemed W Hotel! What’s all the buzz about?

Millions of bee colonies around the world have fallen victim to the phenomenon of Colony Collapse Disorder (CCD). Often attributed to pesticides, industrial agriculture, and disease, CCD has received an increasing amount of media attention because honeybees are essential for 1/3 of the American diet. Bees pollinate 80% of all flowering crops, from almonds to oranges!

That’s why when the W Hotel partnered with a local non-profit, Central Texas Bee Rescue (CTBR), it was yet another example of the W’s love affair with sustainable living. The first mixed-use building of its kind to become LEED-Certified, the W is now the first Austin hotel to install an apiary.

Valerie Broussard holds the title of the W’s “Forager” and is head of the hotel’s Green Team. “What I love about this program,” she says, “is that these bees were rescued rather than exterminated, and we’re making use of a space that otherwise would just be empty.”

Broussard refers to the hundreds of Texas homeowners and businesses for whom finding a beehive means paying an exterminator to destroy it. Her hotel has allied with Central Texas Bee Rescue to stop this destructive practice. CTBR, whose motto is “Honey Bee Kind,” is dedicated to protecting the future of the nation’s bee population by traveling to any Central Texas property and safely relocating bee colonies free of charge.

Central Texas Bee Rescue has an increasing amount of work since Austin City Council passed an ordinance in 2012 mandating the relocation (rather than extermination) of bee colonies. Director and founder of CTBR, bee wrangler Walter Schumacher (aka BEE-CZAR), is a bee rescue and relocation expert. He created CTBR to protect the future of honeybees by providing a sustainable alternative to typical extermination.

Yet getting the bees from an unwanted location to a new home is no easy task. “First you have to figure out the way that you’re going to remove them,” explains Schumacher. If it’s inside a house, he has to cut the beehive out. “If they’re in a tree, you have to set a trap.”

Rescued and transplanted bees colonize the ten “aerial” hives that constitute the W’s new apiary. These feral colonies enjoy a pampered life at the W, living amid a blooming garden atop one of the most bee-autiful and swank high-rises in Downtown Austin. What’s in it for the W?

The honeybees sweeten the W’s success as an eco-tourist attraction. Its locally-sourced restaurant, TRACE, makes use of the feral honey for specialty recipes and drinks. Its cocktail “green bee” (cucumber, basil, lemon juice, citron vodka, and feral honey) is already a guest favorite. The honey is even incorporated in the hotel’s spa treatments and used as a signature element of in-room snack boxes.

Honey-lovers can support CTBR by shopping at the W Hotel. Proceeds from the hotel’s honey sales go toward relocating and rehabilitating more Central Texas bees.

Searching for an Austin home? At Regent, we help families find the perfect home to call their own. Let us make the difference in your ATX luxury home-buying experience! From homes in Rob Roy to Falcon Pointe, you can depend on Regent.