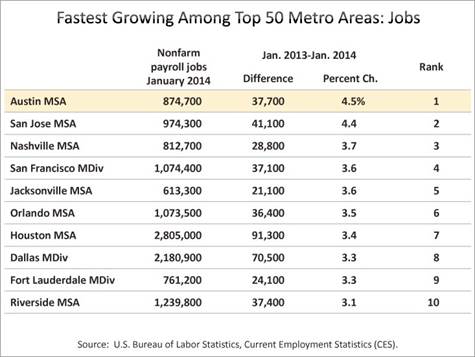 It’s no wonder a life and home in Austin, Texas is quickly becoming a luxury, with more positive news on its economic front coming last week from the Austin Chamber of Commerce. According to January 2014 numbers released by the U.S. Bureau of Labor Statistics, Austin holds the second lowest unemployment rate among large U.S. metros and the fastest rate of job growth.

“Austin’s job growth of 4.5% over the 12 months ending in January seemed likely to be at or near the top,” said Austin Chamber Vice President of Research Beverly Kerr, “and it does prove to be the fastest rate of growth among the 50 largest U.S. metros.” Two of its Texas cohorts, Houston and Dallas, also ranked among the top ten. “Not only is Austin’s 4.5% growth fastest among the top 50 metros, it is fastest among the top 100 U.S. metros as well.”

Aside from Nashville, all the best-performing metros were located in Texas, California, and Florida—the three states with highest increases in job growth. Of the 100 largest metros, Austin held the fastest rate of job growth. Jobs here have increased 35% in the past ten years and 15% in the past five. 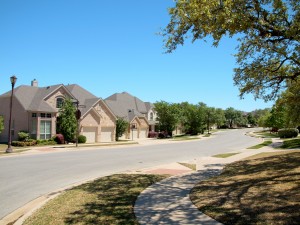 “In Austin, two industries— professional and business services, and leisure and hospitality— have seen the fastest rates of job growth (7.0% and 10.1% respectively),” said Kerr. “Austin’s 10.1% growth in leisure and hospitality is faster than any of the other top 10 metros.” Together, these account for over 18,850 jobs created in the ATX over the past year.

“Austin’s unemployment rate, at 4.7% in January, is the second lowest among the top 50 metros,” concluded Kerr.

Austin REALTOR® Brian Talley celebrates Austin’s position as one of the nation’s top economies, and welcomes new homebuyers entering the ATX real estate market. Whether you are considering a home in Great Hills or an estate in Southwest Austin, choose Regent Property Group. We know Austin.