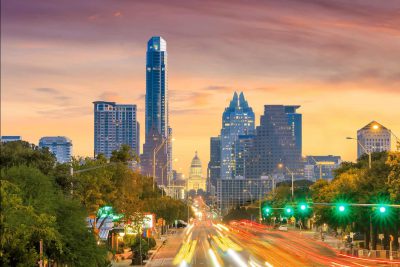 A view of the downtown Austin skyline at twilight

Austin is a city with so much to discover that even seasoned locals have trouble keeping tabs on the newest or most recently revealed restaurant, hiking trail, or venue. Austin relocation promises years of enjoyment, weekends that are never at risk of being dull, beautiful weather in all seasons, and friendly neighbors in every pocket of the city. With so many accolades from reputation alone, it’s no wonder Austin has earned many titles, including rankings in the Best U.S. Vacation Destinations, (Trip Advisor Inc., January 2012), Biggest 5-Year Job Gains in the U.S. (Austin Business Journal, January 2012), and as one of the world’s Top Intelligent Communities, (Culture Map, January 2012). If you’re planning on relocating to Austin, an Austin REALTOR® can help make the process easy with insight into neighborhoods, market statistics, and attractions. 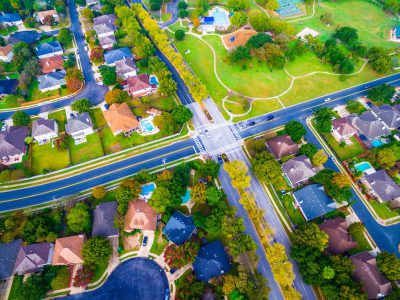 Finding the right home starts with choosing a neighborhood that fits your lifestyle and budget. If you’re new to the city, we recommend starting with our Austin Neighborhood Guide, which offers a broad overview of Austin’s major areas.

Making the Trip and Viewing Properties

When new in town, the first priorities towards getting settled may include finding a hotel to stay in while house hunting, a place to get a good cup of coffee, and signature restaurants to sample food full of local flare and flavor.

A metropolitan city like Austin has every chain hotel most travelers can recognize, but boutique and specialty hotels make Austin’s hotel-scape unique and offer a quirky and character-full respite for both travelers and future Austinites conducting an Austin home search. View Boutique Hotels Spotlight Austin Charm and Specialty Hotels in Austin, Texas.

Coffee shop options abound in Austin, encouraging every joe drinker to take a sip and smile. Enjoy the convenience of a hot cup wherever you are in Austin, by getting familiar with local Austin Coffee Shops and larger coffee shop venues, More Coffee = Austin’s Unofficial Mantra.

Austin is a relative foodie heaven, with options for a variety of palates, occasions, and times of day. Whether you want a gourmet dining experience or a breakfast taco, comfort food late at night or a home-grown sandwich for lunch, Austin’s locally based options can satisfy your craving. Check out some of the most popular local Austin restaurants. 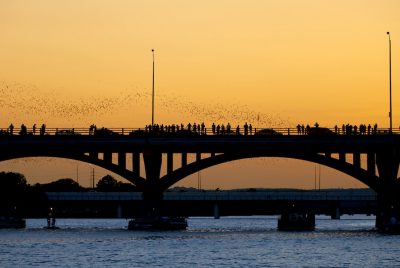 Austinites have a reputation for loving good food, good health, and being outside. Where the three can be combined is the trifecta of Austin perfection, like at the large farmers’ markets held downtown every Saturday, or smaller satellites around the city throughout the week. Austin is also home to the Austin American Statesmen, and other media, making the city a hub of information and on point local coverage.

In addition to a plethora of outdoor recreational activities, Austin offers many indoor gyms in all areas of town, including national chains and gyms with local flavor. Read about Austin’s indoor gyms and also about Austin Yoga Studios.

In a city as large as Austin, it can be challenging to keep up with all the local and national news. Local newspapers and magazines help highlight world events and all the happenings and noteworthy movement around town. Whether profiling local businesses or an upcoming music festival, updating the public about changes to the transit system, studying up on Austin real estate, or interviewing philanthropists, news in Austin is always as close as a street corner or a computer. Read about Austin news outlets, including the Austin American Statesman, Austin Chronicle, The Onion, Austin Woman, and Austin Man.

Grocery stores may be ubiquitous to city living, but living close to a store that fits your needs perfectly can be an added perk to finding the perfect home. Austin, known as a foodie haven, has an array of welcoming stores that primarily sell natural and organic products, as well as feature local, domestic, and international food. A specialty grocery store in Austin usually can be found a quick hop from any neighborhood. Three of the most popular natural food stores include Sprouts, Whole Foods, and Central Market. Read about these Austin’s Natural Food Grocers, plus read about Austin’s wealth of chain grocery stores, many with Texas roots, in Austin Grocery Stores. Interested in ethnic fare? Enjoy foods from around the world at Austin’s Ethnic Grocery Stores.

Education in Austin isn’t just for grade school children; Austin has renowned universities, as well as a plethora of continuing education classes for adults that range from dance to guitar to culinary skills.

Public schools in Austin are in the Austin, Eanes, Pflugerville, Leander, and Round Rock Independent School Districts. Read about each of the Austin-area school districts, including general areas for school boundaries.

Eanes Independent School District encompasses a beautiful stretch of land that encircles several large subdivisions in the Texas Hill Country on the border of Austin. Each neighborhood has the advantage of being part of one of the best school districts in the country. Larger neighborhoods that typically feed into Eanes ISD include Barton Creek West, Davenport Ranch, Lost Creek, Rob Roy, Senna Hills, and Seven Oaks. Read about Eanes ISD neighborhoods and Eanes ISD rankings.

Austin is a diverse city, with equally diverse choices in private schools. The city has many highly-regarded options, both secular and religious in nature. Selecting a private school can depend on many factors, including a family’s proximity to the school, religious beliefs, academic philosophy, and a child’s talents, emotional needs, and desires. Read more about Austin’s Christian-based Private Schools and Austin’s Secular Private Schools.

Austin offers world class educational opportunities for students of any age, with higher learning institutions located in neighborhoods throughout the city. Read about colleges, universities, and adult classes in Austin.

With temperate weather a majority of the year, living outside is one of Austin’s major draws. The city is threaded by trails that weave from downtown to the hill country, accommodating bikers, joggers, and hikers. Swimming pools and golf courses also create outdoor havens for sun sport enthusiasts.

Texas summers have driven residents in search of a cool place to take a dip since before Austin grew up in central Texas. Thankfully, the state has kept its claim and responsibility over several natural areas around Austin. Take a look at the natural swimming holes near Austin.

Austin’s communities offer pools in almost every neighborhood, many with private access for neighborhood residents or club members. City pools are open to all Austinites and offer both chlorinated and spring-fed options. Learn about the community pools in Austin.

Austin is known as “hill country” because of its situation on top and in between the beautiful sloping hills of central Texas. Take advantage of Austin’s green scene and hilltop views by visiting one of the many parks located throughout and around the city.

In Austin, public golf courses dot the map, providing open green space and fresh air to those interested in a nine-hole round. Public courses here have as much history and charm as their private counterparts so if you’re in the mood for a round, read about Austin’s public golf courses.

Take a look around town, and you’ll see how evident it is that we love animals!

Austin prides itself on achieving and maintaining its “No-Kill” status – we’re the largest city in the nation with this status – and as a new Austinite you might discover a hankering for your own best friend for life, whether feline, canine, or avian, from one of Austin’s life-saving animal shelters.

Find the perfect place to play outside with your furry friend with these Austin Off-Leash Dog Parks.

Austin may be warm year round, but opportunities to cool off abound. Aquatic adventures to wet your whistle are found throughout the city. Read about Austin water adventures.

Austin’s natural beauty lends itself to a variety of outdoor activities, some of which are even more fun underground! Read about Austin-area outdoor adventures!

Austin foot races are a testament to the city’s appreciation for the surrounding beauty of hills and cityscape and to a focus on good health made easy by abundant trails. Learn about Austin’s Foot Races.

Trails traverse Austin in every direction so keeping your running or cycling routes varied is easy if you know where to look for a good path.

If Austin’s rush hour has made you feel trapped in your car, try a new route through cycling or jogging. Local stores have all the gear you need to get out and get going. Learn about Austin bike and running shops.

Austin’s title as the “Live Music Capital of the World” was not earned lightly, and Austinites take their live entertainment seriously and with great affection. This means that there’s never a shortage of things to do and see in the city, from concerts to theatre to book festivals.

Austin shares a rich cultural heritage with both the state at large and the world. This heritage is proudly displayed through art exhibitions, document archives, and history displays at museums found throughout the city. Read about Austin’s Art Museums and about other Austin Museums.

The lure of nightlife in Austin draws visitors from around the globe, and Austin has a scene that caters to all tastes. Night time revelers can enjoy the sometimes gritty Red River music district to take part in the city’s thriving music scene.

Austin’s upscale restaurant scene is famous and the options are endless and ever changing. Check out some of the top restaurants in Austin at OpenTable.com.

Sports in Austin don’t just happen on TV. Opportunities to watch and play abound throughout the capital city. Read about amateur and professional sports in Austin.

Austin film festivalAustin’s love of cinema and theatre is reflected in its rich assortment of film and arts festivals, and by world class theatres, both iconic and new located across town. Read about Austin Theatres and Film Venues.

Austin is a city for film buffs, with studios interspersed with office buildings and celebrities regularly seen in town shooting scenes for upcoming feature films. Every year, filmmakers and film lovers descend on the city limits to celebrate the art of filmmaking through three annual festivals: SXSW Film, Fantastic Fest, and the Austin Film Festival & Conference. Read about Austin’s Fim Festivals.

Austin’s number one reputation maker is as a city for musicians and music lovers alike. The multitude of music festivals that punctuate weekends throughout the year celebrate Austin’s namesake as the Music Capital of the World. Learn more about Austin’s annual music festivals.

Austin’s reputation as a scene for “foodies” is growing rapidly, and talented chefs coupled with vintners from Austin’s backyard to across the globe create an array of festivals celebrating gourmet food and wine throughout the year. Read more about Austin’s Food and Wine Festivals.

Festivals happen year round and for almost any occasion in Austin, and some of the best showcase the local flavor of the Austin community, celebrating everything from the arrival of spring to our very pun-ny citizenry. Read all about Austin Flavor Festivals, Part One and Part Two.

Austin has had a weird reputation for decades, and vintage/antique stores throughout the city let shoppers revel in its gloriously weird past. Learn about Austin opportunities for antique and vintage shopping.

Austin is cited repeatedly as a city with a flourishing employment rate and job growth, in part because major corporations have placed the hub of their operations in the heart of Texas. Technology is a major staple of Austin employment, as well as state government and entrepreneurial business.

We're here to help. Fill out the form below and one of our agents will get back to you as soon as possible.