Trail of Lights Returns to Austin after Hiatus 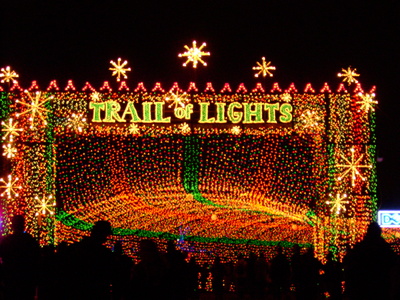 Austinites have deeply missed the traditional Trail of Lights the past two years due to its lack of funding … but Happy Holidays again! It recently was announced the Austin Trail of Lights will return to Zilker Park this December with new attractions, brighter lights, and exciting events. The revival of the holiday tradition will be sponsored by a partnership that includes the RunTex Carrozza Foundation, ForeFront Austin, HEB, and other businesses with an Austin presence like Dell, Samsung, Seton Healthcare, Vista Equity Partners, AT&T, Cirrus Logic, Humana, and Wells Fargo.

On December 16th, the Trail of Lights will kick off in Zilker Park, close to the Barton Creek and Tarrytown neighborhoods, and the festivities will run through December 23rd. This year’s events include performances by dancers, singers, musicians, and carolers with themes every night, including Heritage Night, School Spirit Night, and Military Appreciation Night. Food and drink will be available, including hot chocolate, cider, and food from local food trucks and trailers. The Trail of Lights 5K will be held on December 15th.

The Trail of Lights began in 1965, when it was called Yule Fest, and instantly became an Austin tradition that in 1992 came to be known as the Trail of Lights. “The Trail of Lights is an iconic part of Austin,” said Austin REALTOR Brian Talley. “It’s a free family event that brings all of Austin together, and is, quite literally, a ‘high light’ of the year.”