The Cows Are On Parade in Austin 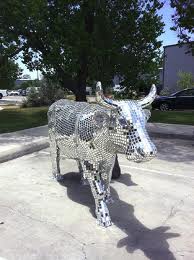 The decorated heifers that can be seen all around town as part of the CowParade are going to “live auction” this Sunday, November 13, 2011 at ACL Live @ The Moody Theater in Downtown Austin. Tickets are by invite only, based on donation amounts. The public is encouraged to donate for the opportunity to receive a ticket, starting with $25. The cows will be auctioned Sunday evening by celebrity guest Jay Leno and are expected to sell for anywhere from $500 to $10,000. The proceeds from the auction will go to benefit the Superhero Kids Endowment at Dell Children’s Medical Center. 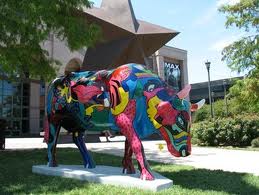 The CowParade decorated cows have been on display in Austin all summer. The “disco cow” can be seen in front of Whole Foods,  there is a “chia cow” on South Congress street in South Austin, and the “Vince Young Championship Longhorn” can be seen on UT’s campus. Over 60 artists were commissioned to decorate the cows before they were placed in various spaces around town, including a spot on Lake Austin. Each cow is different. Likewise, each cow was sponsored by a different organization, such as by HEB and Embassy Suites Austin. There is still a chance to get a glimpse of the cows in their public spaces until Saturday, November 12, 2011. 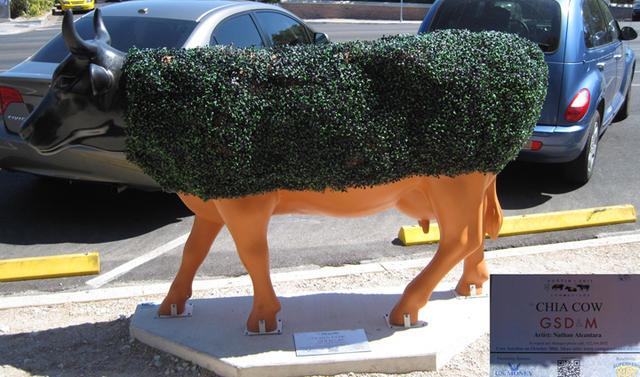 The cows have become a big part of Austin’s summer culture, with people posing for photos with them and making goals to see every cow. There has even bit a bit of cow vandalism (or artistic license,) as one Texas artist and rancher took actual “cow patties” from her pasture, painted them, and placed them in the appropriate spot behind six cows in Austin.

Local Austin REALTOR® Brian Talley has visited some of the cows with his children and says the cows represent Austin’s quirky, artsy culture, embodying the spirit of “Keep Austin Weird”. If you are looking for a place in Austin to call home, perform an Austin Home Search and allow Brian to help you find the perfect place.