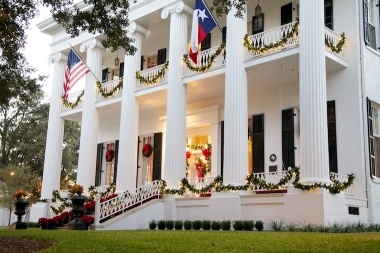 Fresh from a newly completed $25 million restoration, the Texas Governor’s Mansion in Austin is celebrating its first Christmas in new form with a special message: honoring America’s troops. Governor Rick Perry and First Lady Anita Perry have chosen military-themed Christmas decorations to give special thanks and recognition to our nation’s armed forces.

Each public room in the Governor’s Mansion will honor a different service branch – the Army is featured in the library, the Marines and Navy in the state dining room, the Air Force in the conservatory, and the Coast Guard in the entry hall. Additionally, the stars placed in the garland on the staircase represent the 72 Texans who have received a Medal of Honor.

“As we look forward to celebrating this holiday season with our friends and family, it is of utmost importance that we take the time to remember those serving our country and preserving our freedom,” Gov. Perry said. “The First Lady and I would like to wish everyone a Merry Christmas, and encourage all Texans to keep our nation’s armed forces in their thoughts and prayers.”

The Governor’s Mansion is a prime piece of Downtown Austin real estate, located near the Capitol Complex and other state offices and buildings. This year marks the first Christmas the mansion has been decorated since the completion of its restoration in the summer of 2012, following arson that caused tremendous damage to the structure and its contents. While public tours are not yet available, additional pictures of the Christmas decorations can be viewed here. The mansion, truly one of Austin’s finest luxury homes, historically is a popular spot for tourists, especially those considering a move to Austin. The Governor’s Mansion has been the home of every Texas governor since 1856.

First Lady Anita Perry said, “This year’s decorations are a constant reminder of those serving in the military who will sacrifice the company of family during the holidays to serve in the defense of freedom. We owe a debt of gratitude to the selfless, brave men and women serving in our military.”