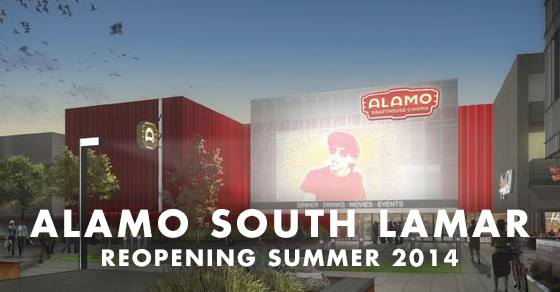 In January of 2013, redevelopment of Lamar Plaza closed the Alamo Drafthouse South Lamar, the beating heart of the Alamo Drafthouse empire. This beloved Alamo location was the downtown Austin home of the Fantastic Film Festival, which showcases independent movies, major Hollywood Studios, and international filmmakers. Neighbors watched with dismay as the entire strip mall went under the wrecking ball so Greystar Property Firm could turn the site into a mixed-use development.

The good news? The Alamo Drafthouse South Lamar will not have to search for a new Austin home. In the summer of 2014, this iconic cinema-eatery will reopen in grand style with brand new digs as part of the new “Lamar Union” center.

The new Alamo will show off a luxury facade designed by award-winning local architect Michael Hsu. Also, the location of the theatre and the Highball will be reversed, with the Alamo Drafthouse Cinema on the left and the restaurant on the right.

The new Highball will offer a stage and seven private karaoke rooms, minus the bowling lanes and plus a new outdoor patio. The new Alamo South Lamar will accommodate 900 guests and offer 750 mostly-covered parking spaces. 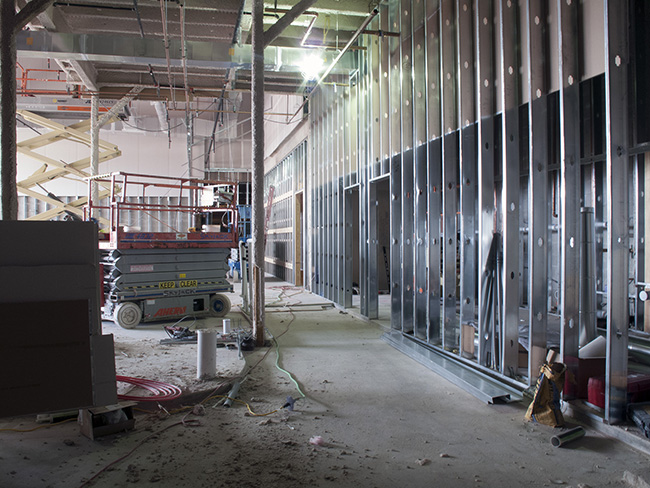 As far as tech improvements, the redesigned cinema will debut new Sony 4K digital projection systems and Dolby digital surround sound and two new micro-theatres. One will be capable of changing to 35mm (similar to the original theatre one). Also, 16mm screenings may be moved from the Ritz to the new Lamar location.

While some institutions of the original Lamar Plaza strip mall will be gone forever, like World Spirit Books and Bitchin’ Threads, others found a new home. Alien Scooters and Austin Vintage Guitars moved to Burnet Road. Lamar Drug Store moved down the road. Sadly, Ray Hennig’s Heart of Music moved all the way to Temple, Texas.

While Austinites eagerly anticipate the summer reopening of Lamar Union and the new Alamo Drafthouse South Lamar, they can get their Alamo fix at the other four Austin-area locations: Ritz, Slaughter Lane, Village, and Lake Creek!

Photos courtesy and with permission of Alamo Drafthouse.