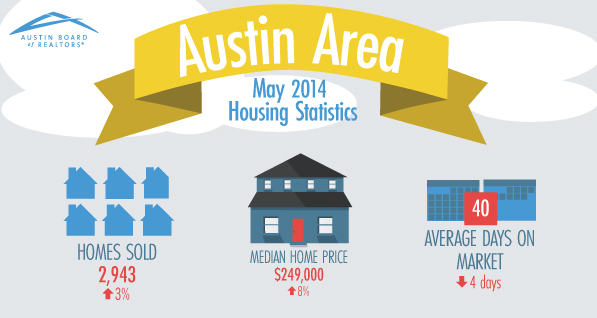 Austin-area home inventory increased from a 2.3 month supply to a 2.6 month supply this April to May 2014, the first time listings have increased in over three years, according to a Multiple Listing Service (MLS) report released by the Austin Board of REALTORS®. May’s 2.6 months of inventory is the highest level since last September, and the consistently tight availability of listings has put upward pressure on prices and led to increased competition among buyers.

While the loosening of inventory eases this pressure, the supply is still .1 months less than at this time last year and significantly less than what is considered a “balanced” real estate market – a 6.5 month supply. (Housing inventory is the number of active listings divided by the average home sales per month of the prior 12 months.) Average days on the market continued to drop as a result, down four days from last May to 40 days.

“The Austin market has been in need of housing stock for some time now so it’s encouraging to see an increase in listings over last year,” said ABOR President Bill Evans. “With sales volumes remaining strong, the market is still competitive, but the options for buyers are beginning to increase.”

There were 5,949 active listings in May 2014, up four percent compared to last May. Pending sales were up two percent, to 2,928. Median home prices rose eight percent, to $249,000. This marks an all-time high median sold price for Austin and almost a $10K jump from last month’s previous all-time high. For almost two-and-a-half years, the Austin market has seen monthly year-over-year increases in median price.

“While more properties are beginning to come on the market, the price appreciation we’ve seen in recent years is continuing as well so buyers and sellers should both expect a busy summer selling season,” said Evans.