Since the Alamo Drafthouse began using a reserved seating system, vying for space in the lobby of the South Lamar theatre location has become much less difficult prior to a screening. Now, by 2014, with the recent purchase of Lamar Plaza by Greystar developers, a brand new Alamo Drafthouse on Lamar will open with more screens and more lobby room, as well as new neighbors and a renovated Highball.

The purchase of Lamar Plaza will reinvigorate the aging South Austin strip mall into a mixed-use project featuring, in addition to an expanded Alamo Drafthouse and new Highball, shops and restaurants, and more than 400 apartments. The location is close to South Austin neighborhoods like Barton Creek and Lake Austin.

The nine-acre strip mall was appraised at $9.5 million by the Travis Central Appraisal District. Greystar told the Austin American Statesman that the 1950s-era shopping center’s existing merchants will most likely remain open until mid-November, when some will close and some, like the Lamar Drug Store, will relocate. 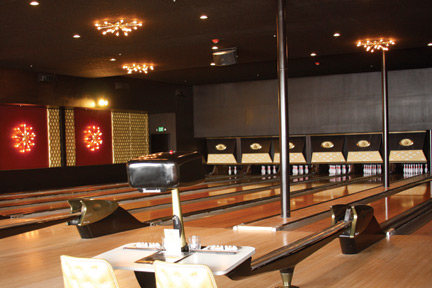 Artist renderings by the Austin-based Michael Hsu Office of Architecture show a series of sleek, modern buildings that range from three to five stories tall. More parking than presently exists also will be built through on-site garages. The Highball is expected to close for construction by November 17th, and the Alamo Drafthouse by January 3rd. The one piece of bad news for Austinites about the remodeling: the new Highball will not have bowling lanes, but there will be enough new bells and whistles to possibly distract die-hard Highball bowling fans from that loss.