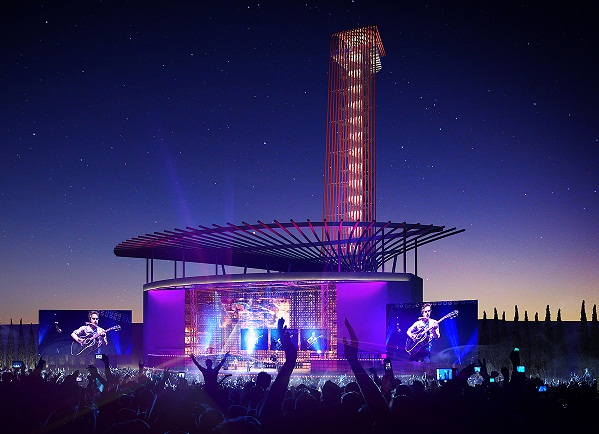 Austin’s Formula 1 may not be here until November, but it’s had Austinites frothing at the mouth for quite a while. In keeping with Austin’s music scene, to help with promotion of the venue year-round, and to help regulate post-race traffic, Circuit of the Americas recently announced details of The Tower Amphitheater, a magnificent open-air amphitheater under construction in Southeast Travis County.

The live music venue will be at the base of the track’s 22-story race viewing tower, hosting up to 15,000 people and creating the largest permanent stage near Austin. Its estimated completion date is April 2013, poising it perfectly for the summer concert touring season.

COA recently engaged in a booking agreement with Live Nation, the world’s largest live music and entertainment company, to bring concerts and tours to the venue. Other ongoing uses for the facility include business, education, entertainment, and racing-related classes.

In addition to the track and the amphitheater, the permanent Circuit of the Americas structure will feature a conference center, a banquet hall, and a state-of-the-art medical facility. Other proposed amenities include a motorsports driving club, a kart track, and a trackside recreational vehicle park.

Easy access to this exciting venue from an Austin luxury condo in downtown Austin can be available with the help of the Realtors at Regent Property Group.