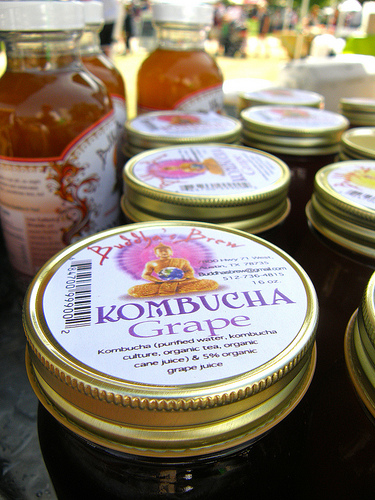 Some days, nothing sounds better than a cold bottle of active bacteria strands muddled with green tea and a light flavoring. Really. Kombucha, a fermented beverage rich in beneficial probiotic bacteria, is a drink that has been cultivated for centuries around the globe, and since 2006, has been bottled and sold with huge success around Austin, from far north near Avery Ranch to south side’s Villages at Western Oaks, by local company Buddha’s Brew.

Buddha’s Brew is a mixture of probiotic bacteria that has been used to ferment tea and can be bought bottled or on tap. “Kombucha is just one style of probiotic micro-organisms that can make food and are also healthy for the body to consume,” explained Buddha’s Brew co-owner John-Paxton Gremillion. “Probiotics are good for you because digestion is sustained by a healthy influx of probiotic organisms, and if you don’t get a ready source, you start to become very monocultured, which isn’t a very efficient process for the body.”

Buddha’s Brew was founded by Kimberly Lanski, who originally sold her batches at the Barton Creek Farmer’s Market. “Kimberly loved the taste of kombucha, and had been buying national brands, but she noticed that a lot of national brands, when they got big, the tastes changed and the product became less wholesome and less delicious,” says Gremillion. Her booth of homemade kombucha at the farmer’s market grew rapidly in popularity, and from there, the business branched to include vendors at grocery stores, coffee shops, cafes, and juice bars. When filling so many orders became difficult, Lanski and Gremillion acquired a commercial kitchen/brewery in South Austin to help meet the growing demand for their product.

The company name is inspired by the drink itself. “Kimberly had always been interested in learning about spiritual practice and meditation, and she wanted to apply those things to the world she lived in,” says Gremillion. “Buddha’s Brew is a reflection of that; she wanted to do a service to the world integrated with her work.”

Buddha’s Brew can now be found throughout the city, at retailers like Whole Foods in Northwest Austin and Downtown Austin, Wheatsville Co-op, Taco Deli, Live Oak Market, Daily Juice, Zen Sushi, Royal Blue, Fresh Plus, and over a hundred other local places. Some kombucha can be too vinegary or acidic, but Buddha’s Brew prides itself on being very drinkable, perfectly balanced between tart and sweet. Gremillion suggests, “Enjoy Buddha’s Brew alongside a meal; other brands can be a little antiseptic but this one can really compliment nice, healthy food like at Zen Sushi.”

Kombucha tea is a unique beverage, just like the city of Austin itself. “The people in Austin are interested in new and different concepts, and it’s very rewarding of small businesses attempting something a little unusual; when we started at the farmer’s market we found a community of people who have really helped us out all along the way,” Gremillion says, explaining why Austin is an ideal spot for emerging business ventures. “Austin is one of the best places to start any small business like this because there are people looking out for you and being supportive; we have a lot of gratitude to the people of Austin.”

Austin REALTOR® Brian Talley takes pride in the city’s own penchant for culturing and fermenting young businesses. If you’re looking to settle in Austin’s business friendly environment, a realtor can assist a search for a new starter home when the business is new, and later, an Austin luxury home once the business succeeds.