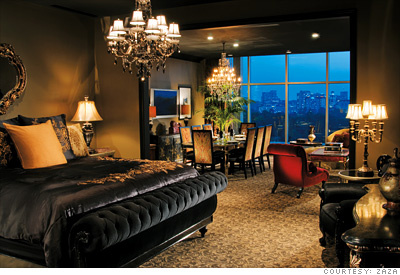 Austin’s growing reputation as a cool kid on the international scene has meant scores of visitors from across the world are entering the Austin City Limits every day for vacations, Formula 1 races, music festivals, technology fairs, and more. The one problem Austin has had to contend with is not enough beds to sleep the volume of people who want to visit the city.

Several new luxury hotels have been announced to ease the room shortage, and the newest one is the Hotel ZaZa. This 24-story tower in downtown Austin will have 215 luxury apartments atop a 160-room hotel, which would mark the upscale boutique hotel’s central Texas debut. Project planners are forecasting that the hotel will be built on West Fourth Street between Guadalupe and Lavaca streets, with construction slated to start in mid- to late-2013, and doors opening to guests and residents in 2015.

“Austin’s apartment and hotel markets are the strongest real estate sectors,” said downtown Austin REALTOR Brian Talley. “It’s a landlord’s market, and the only solution to help ease the pain of rent for renters is to build more apartments, but that takes time. This project is another step in the right direction to meet Austin’s growing needs.” Further driving the demand for downtown accommodations is the popularity of staying overnight in downtown hotels to avoid late night driving to luxury homes in Steiner Ranch and ranch style homes in Shady Hollow.

The hotel complex will offer guests and residents multiple restaurants, two pools that would overlook Republic Square Park, meeting spaces, and a luxury spa to be called ZaSpa. There are only two other Hotel ZaZa’s; the first opened in Dallas ten years ago and the second in Houston in 2007, both with great success. While the brand has a consistent luxury aesthetic, ZaZa hotels are not homogeneous but rather feature custom touches tailored to the local market, and the Austin hotel will reflect the flavor of the city.

“New hotel and apartment construction bring jobs and people to the local economy,” Talley said. “It’s great news for Austin that projects like this are in full swing and primed for immediate success.”