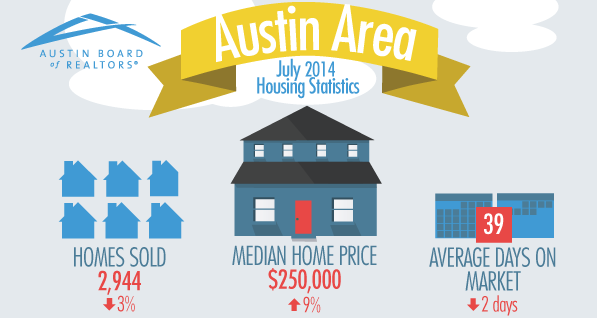 In July, Austin-area home sales dipped three percent to 2,944 single-family homes sold, according to an Austin Board of REALTORS® Multiple Listing Service (MLS) report. Since this is the first decrease in home sales since May 2011, it is notable, but it also follows a surge in June, which saw a double digit increase of 13%.

In addition, “July 2013 had the highest monthly home sales volume in Austin’s history, so we knew it was going to be a tough month to beat,” said ABOR President Bill Evans.

Home prices continued their climb in July, with the median price increasing nine percent year-over-year to $250,000, and the average price rising seven percent to $318,854. Time on the market continued to decrease, with single-family homes spending an average of 39 days on the market, compared to 41 days in July 2013. The dollar volume of single-family properties sold was up 4% compared to July 2013, to $938,706,176.

“We don’t believe this small decrease in home sales is indicative of a negative trend,” said Evans. “The high demand for Austin real estate over the last few years continues to be fueled by strong job and economic growth in the Austin area.”

Housing inventory in July again rose .2 months to a total of three months, for the first annual increase in inventory levels since May 2011. This mainly was a result of a 12 percent year-over-year jump in active listings, to 6,859 homes. This inventory level is still less than half of the 6.5 months that is considered a balanced real estate market, according to the Real Estate Center at Texas A&M University.