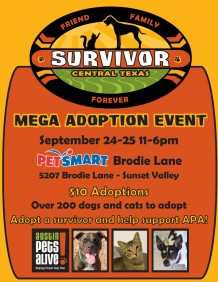 In Texas, we’re well known for the “go big or go home” philosophy, and this weekend a local charity is taking that to heart, though they may need to change up the phrasing a bit! This Saturday and Sunday, one of Austin’s most successful and dynamic rescue organizations, Austin Pets Alive!, is hosting a MEGA Adoption event where they hope to place over 200 dogs and cats in homes over the course of one weekend. So really, they’re going to “go big” so these animals can finally go home – to a forever home.

APA! already does amazing work in the community, thanks to their dedicated staff and volunteers and their great new facility in South Austin. APA! works with local animal shelters to help foster and home many animals who typically would never see life outside the shelter doors again. They also have been major players in the city’s goal of making Austin a “no-kill” city, a goal that is close to being achieved, with many months in 2011 surpassing the 90% no-kill threshold (meaning that 90% of animals taken in to Town Lake Animal Center, the city shelter, were adopted, fostered out, given to a rescue group, or returned to their owner).

Recently, the group was able to take in over 250 healthy, adoptable dogs and cats who were removed from shelters in the area’s fire-affected communities so those shelters could then take in animals who may have gotten lost in the fires or whose homes were burned. Now, all of the non-evacuee animals need homes in Austin.

This weekend, APA! will host their Central Texas Survivor: Friend, Family, Forever adoption event, the biggest adoption event APA! has ever hosted, with a goal of adopting 200 healthy dogs and cats. In order to encourage people to adopt, they are reducing their usual adoption fees to just $10. For that kind of deal, you can bring home a whole litter full of love!

Austin Realtor Brian Talley fully supports the work of groups like APA! and encourages you to go out this weekend and adopt a new friend. His beautiful dog Bella does, as well. If you’re looking for a new Austin home for you and your new friend, be sure to check out Brian’s real estate website for all of the latest and greatest listings.