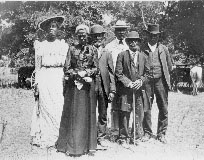 Westlake resident Alicia M. has already planned a visit with her kids. “It’s a unique opportunity to teach our family about local Austin history from a broad cultural perspective. We’re very excited. West Austin schools like Eanes are planning field trips, but we want to attend opening weekend and help out with opening festivities.”

The new exhibit focuses on the years 1839 through 1940, the first century of African American life in Travis County. It explores the contributions and achievements as well as the obstacles faced in building a community and obtaining the American dream.

The first record of African Americans in Texas is widely believed to have begun with Estevanico, a slave held by Spanish Explorer Andrés Dorantes de Carranza. In 1528, Estevanico was one of four survivors of the ship-wrecked Pánfilo de Narváez expedition that was stranded off the Texas coast. Although he would later be killed by the Zuni Indians, he played an important role as a translator between the explorers and the native tribes they encountered. His account, along with the other explorers, offered vital information about the Texas coast that helped lead to further exploration and the eventual settlement of Texas by the Spanish!

Learn more at the Austin History Center (AHC), located in Downtown Austin on 810 Guadalupe Street. What are the hours? The AHC is open 10 a.m. to 6 p.m. Tuesday through Saturday, and noon to 6 p.m. on Sunday.

Don’t miss this extraordinary new exhibit! The exhibit is free to the public. For more information, just call 512-974-7480.

The REALTORS® of Regent Property Group applaud the Austin History Center for its mission to share Austin’s rich cultural history with Texas residents and visitors. Looking for a condo or home for sale in beautiful Austin, Texas? It’s our mission to help home-buyers stay on top of the local real estate market. Check out Austin Home Search today!