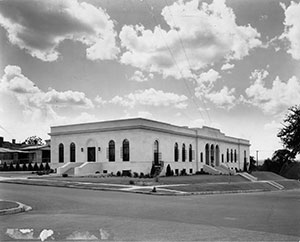 One of Austin’s most beloved landmarks, the Austin History Center, turned 80 years old this year. To this day, it upholds its octogenarian mission to procure, preserve, and provide the historical records that make up Austin’s unique story.

Designed by Hugo Kuehne to serve as the first library in Austin, AHC began construction in 1932, and the building remained Austin’s main library until the 1979 opening of the John Henry Faulk Central Library. One of its treasures is the Mayors’ Room, which displays pictures of Austin mayors from 1839 to the present.

In 1983, public and private partnerships enabled renovations, and the building was deemed the Austin History Center. The Center serves to collect and preserve information about local governments, businesses, residents, institutions, and neighborhoods so that generations to come will have access to their history. It also provides the public with information about the current events and activities of Austin and Travis County.

At 810 Guadalupe Street, the AHC building was created by local craftsmen with local materials such as Cordova cream limestone. Peter Mansbendel hand-carved the interior woodwork, and the frescoes were painted by Harold Jessen and Peter Alindi. The wrought iron was formed by Fortunat Weigl.

With the upcoming new home for Austin’s central library, the center may expand into the John Faulk Library in continuation of its service in preserving Austin’s historical legacy.

The REALTORS® at Regent Property Group support Austin landmarks like the Austin History Center. Interested in a home in Avery Ranch? Regent PG also supports Central Texas buyers in their search for the best homes on the market. From homes in Downtown Austin to homes in Senna Hills, consider Regent.