Austin may not host a professional sports team, but it provides plenty of chances to watch and play sports. The University of Texas houses Olympic athletes and championship teams, while local clubs allow Austinites of all ages and walks of life to experience team dynamics.

Dallas may have the Cowboys, but Austin has the Longhorns, and they play every sport from tennis to football, and spectators line the stands at every event. In the Big 12 Conference, University of Texas athletes have claimed more titles in men’s and women’s sports than any other school since the league began operating in 1996. The Longhorn football team has won four national championships and ranks second in NCAA all-time victories, and the stadium is packed with fans every game. Longhorn athletes have competed around the world in both college sports and at the Olympics, with a strong history in the sport of swimming, and Austin residents can buy tickets to take in games, meets, and matches throughout the year. Students also can take part in playing through The Division of Recreational Sports, which was first founded on campus in 1916. More than 45,000 men and women participate in Recreational Sports activities like flag football, softball, court and water volleyball, ultimate Frisbee, soccer, and team tennis. Special tournaments for students like 3 on 3 basketball, dodgeball, and kickball also take place on campus. It’s not uncommon to drive past games taking place on fields throughout campus, many close to homes in the Allandale neighborhood, with a crowd of spectators cheering.

The Austin Sports and Social Club creates year-round opportunities for individuals to play a variety of team sports in a social atmosphere that is often carried over into happy hours and lasts long after games are over. It’s the perfect combination of sports and social scenes that caters to residents from South Austin to the northern tip, like Lake Travis neighborhoods. The Austin SSC is open to everyone 21 and up and is Austin’s largest sports and social organization, where over 18,000 players took part in one of 50 sport seasons in 2012. The Austin Sports & Social Club offers 13 different sports to choose from, including kickball, dodgeball, sand volleyball, and soccer, as well as multiple divisions, from costumed-silly to seriously competitive. 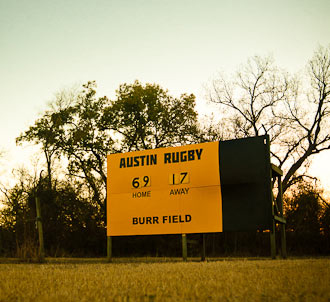 Founded in 1967, The Austin Rugby Club was the first rugby club to form in the Southwestern United States. The Austin Rugby Club currently fields two competitive sides in the Texas Rugby Union and USA Rugby National Championship Series, and the Austin Blacks compete in Division 1 and the Blacks-2 in Division 3. In 2008, rugby veterans established the Texas Rugby Association of Austin, a 501(c)(3) nonprofit program that provides facilities, coaching, mentoring, and financial support for developing youth rugby in the Austin area. Players from across the city can try out to be part of the Austin Rugby Club, which has toured the world for matches and championships.

Circuit of the Americas F1 Racing

Formula One, or F1 racing, came to Austin with the Circuit of the Americas track in 2012. Known officially as the FIA Formula One World Championship, F1 racing is the highest class of single-seat auto racing recognized by the Fédération Internationale de l’Automobile. The F1 season consists of a series of races, known as Grand Prix, held throughout the world on internal circuit tracks and public roads. F1 cars are the fastest multi-turn circuit-racing cars in the world, with speeds up to 220 mph. The Circuit of the Americas track is a multi-purpose facility that hosts some of the most prestigious racing events in the world, including the Formula 1 United States Grand Prix™. It is a state-of-the-art 3.4-mile circuit track with the capacity to hold 120,000 fans. The facility is located on a 1,000-acre site just two miles from Austin Bergstrom International Airport, with scenic views of downtown. The facility’s Grand Plaza, Observation Structure, Tower Amphitheater, and Main Grandstand were designed by Austin-based architectural firm Miró Rivera Architects.

The Austin Toros are a basketball team of the NBA Development League playing their home games at Cedar Park Center, located not far from homes in Avery Ranch. The team is an affiliate of the San Antonio Spurs and has enjoyed numerous wins, achieving postseason games seven out of their 12 seasons in the league. The team offers Winning Wednesdays, where a win for the Toros means fans in attendance receive a free ticket to the following Wednesday game. Fans can hear local artists on Live Music Fridays and enjoy a special discounted ticket package for Sunday games that includes a game ticket, hot dog, and drink for Family Fun Day. The Austin Toros also provide summer basketball camps for players in the 4th through 9th grade, where kids can improve their fundamental skills on the court and develop their basketball potential. The team’s logo features a bull and basketball with the state of Texas in the background, and reflects the silver and black color scheme used by the Spurs to mark their affiliation.

The Round Rock Express is a class Triple-A Pacific Coast League minor league baseball team based in Round Rock, Texas. The team is owned by RSR Sports (Nolan Ryan, Don Sanders, and Reid Ryan) and was founded by Reid Ryan, the son of Nolan Ryan. The team is affiliated with the Texas Rangers, based in Arlington. Home games for the Round Rock Express are played at the Dell Diamond in Round Rock and are huge attractions for locals. Fireworks and food drives for local charities also bring in the fans!