Round Rock Homes For Sale

The second-fastest growing city in the nation, Round Rock enjoys the advantage of an award-winning master plan, park system, and school district, as well as holding some of the lowest crime, property tax, and utility rates in Texas. In 1970, only 2,700 residents lived in Round Rock, Texas. In 2013, over 104,000 individuals called the city home.

Round Rock stands as a major center for economic growth in central Texas, with industry strongholds in clean energy, advanced manufacturing, life sciences, and computer/software development. The Austin-Round Rock area ranked second in the Milken Institute’s list of Best-Performing Cities in America for 2012. The area also ranked 5th in the United States among the Best Cities for Relocating Families, according to a national study by Primacy and Worldwide ERC®. In 2010, Forbes.com ranked Round Rock the second most innovative city due to its patents per capita and ratio of high-tech, science, and “creative” jobs. When CNBC searched for the perfect U.S. suburb in 2011, Round Rock made number eight. With its median house value below that of nearby Austin, a metro-area unemployment rate lower than the national rate, and its ranking as one of the top four safest cities in the U.S., it is quite the competitor!

Speaking of tough competitors, “Round Rock is branded ‘Sports Capital of the Texas’ and just built a huge sports complex,” shared resident Karen Thomas. Though famed for its amateur, youth, and recreational sports, its crown jewel Dell Diamond houses the Round Rock Express, a Triple A affiliate of the Houston Astros!

Properties in Round Rock

Now the second largest city in the Austin area, Round Rock homes attract residents from all over the world. “Round Rock is attracting and retaining talented individuals because of all of the higher education options we offer and because of our sense of community and economic vitality,” said Mayor Alan McGraw.

Round Rock offers both new construction and resale homes, with the oldest from the 1930s. Homes in Round Rock can range from starter homes to homes into the millions. For a luxury home in the most prestigious neighborhoods of Round Rock, consider Avery Ranch, Teravista, Arbor Place, Great Oaks, Avery Brookside, Hidden Glen, Ranch at Brushy Creek (Trailside, The Ranch, The Retreat, and The Domain), Behrens Ranch, Mira Vista, Walsh Ranch, Brushy Bend Park, Highland Horizon, Spanish Oak Terrace, Forest Creek, Paloma Lake, Lake Forest, and Eagle Ridge.

Round Rock, Texas is located on Highway I-35 in Williamson County just 15 miles north of Austin, the state capital. State Highway 130 and 45 toll roads run through portions of Round Rock and have greatly increased mobility to the city. Round Rock’s zip codes are78664, 78665, 78681, 78680, 78682, and 78683. Its MLS areas are RRW and RRE. Its stands 21 miles north of the Austin-Bergstrom International Airport, nine miles south of Georgetown, and eight miles east of Cedar Park.

Most homes in Round Rock are served by Round Rock Independent School District (RRISD), a highly acclaimed district and one of the largest in Central Texas

Of the best places in the U.S. to live, work, and play, Kiplinger’s Personal Finance ranked Round Rock No. 6 in 2008. The study looked for cities with strong economies, abundant jobs, reasonable living costs, and plenty of fun things to do! Here are just a few of its cultural offerings:

Residents watch the beloved Round Rock Express team play ball at the famous Dell Diamond, which was voted the #1 ballpark in the country by the Fifth Annual Minor League News. The center also hosts amateur sporting events, musical concerts, and various exhibitions.

A four-day, nationally-recognized Americana and roots music celebration showcasing over 30 bands on four stages, Old Settler’s Music Festival has taken place in Round Rock every spring since 1987.

On Thursdays from March through May, the City of Round Rock sponsors Music on Main Street, a free music series on the Main Street Plaza Stage. In the fall, the city presents free Movies in the Park at Main Street Plaza and Centennial Plaza. Under the direction of newly-appointed music director Stefan Sanders, Round Rock Symphony draws classical music lovers from all over central Texas.

The performance space known as Sam Bass Community Theater was the original depot for the Union Pacific Railroad that ran through Round Rock. For over 35 years, SBCT has offered Round Rock live performances and theater education programs in the historic space.

“Nothing can promise a hit like the Sports Capital of Texas. Gear up and tackle the stylish Round Rock Premium Outlets and contemporary IKEA,” said Nancy Yawn, director of the Round Rock Convention and Visitors Bureau, “and when you’re ready for some downtime, warm up the benches at one of our many tasty restaurants.”

At Round Rock’s IKEA, shoppers can enjoy a delicious salmon filet and spring salad at its restaurant before spending an afternoon perusing 500 thousand labyrinthine square feet of low-cost Scandinavian ready-to-assemble modern furniture, appliances, and home accessories.

Round Rock offers over 47 city-owned parks and was awarded the 2013 National Gold Medal Award for Excellence in Park and Recreation Management (the highest national honor in the park and recreation industry). “We’ve felt for years that Round Rock’s Parks and Recreation Department is one of the best in the business, and it is an important element of what makes us such a special community,” said Mayor McGraw.

The creek-side trails of Memorial Park lead to the famous “round rock” and bronze sculptures at Chisolm Trail Crossing. The centrally located park also boasts a commemorative WWII torpedo, various memorials and plaques, and a playground for children.

Five years in the making, specially-designed Play For All Abilities Park features 51,000 square feet of accessible outdoor fun for every child — including those with disabilities.

Round Rock Water ParkRound Rock definitely pulls its weight when it comes to places to work out. Planet Fitness, 24 Hour Fitness, Gold’s Gym, YMCA, and Anytime Fitness are all within five miles of the heart of Round Rock.

When it comes to recreational sports, the city also has the niche cornered. “Our city holds the distinct title of ‘Sports Capital of Texas’ for amateur, youth and recreational sports,” explained Yawn. From the $14 million Round Rock Sport Center to the 11,000-capacity Kelly Reaves Athletic Complex (aka Round Rock ISD athletic complex), it’s easy to see how the city earned this moniker.

For water-lovers, 64-mile Lake Travis boasts over 20 marinas and is only 14 miles away. It offers fishing, boating, swimming, scuba diving, waterskiing, windsurfing, zip-lining, and more. Golfers appreciate that Teravista Golf Club, Forest Creek Golf Club, and Avery Ranch Golf Club are all within six miles of downtown Round Rock.

Subdivisions in Round Rock

Originally called “Brushy,” the city of Round Rock was established in 1851 and given its current name in 1854. “Round Rock is named for an actual ‘round’ rock in the center of Brushy Creek,” explained Thomas. The rock was a landmark on cattle drive maps back in the day. “If the rock was under water, the creek was too high to cross,” she said. “If you could see it, then it was safe to cross.” 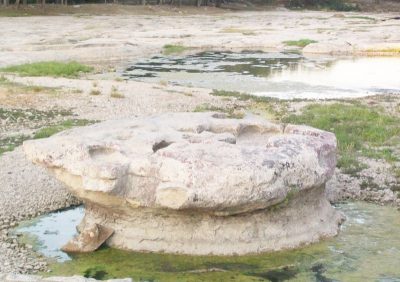 The Chisholm Trail passed through the current City of Round Rock, crossing Brushy Creek at the site of the famous rock. Texas sculptor Jim Thomas has been commissioned by the City of Round Rock to create a 22-figure bronze Chisholm Trail Drive for the city’s new park at the site of the famous crossing. “There are currently five bronze sculptures in the new park with the latest being ‘Goin’ To Water,’ a walking longhorn commissioned by Mary and Edward Torres to commemorate their long family heritage in the area. The sculpture holds the Torres registered cattle brands and ear tags,” added Thomas.

The arrival of the International and Great Northern Railroad in 1876 forced Round Rock’s commercial area eastward. Today, the original settlement (referred to as Old Town) has special historical interest. Several businesses have restored and relocated to these buildings. Interesting fact: Downtown Round Rock was the scene of the historic gunfight and capture of famous train robber Sam Bass!